It is almost impossible to watch 30 minutes of television without seeing an ad for reverse mortgages. As seniors talk about their “favorite day” of home ownership and actor Robert Wagner extols the virtues of senior consumption, the spots present reverse mortgages as newfound wealth – a latent lottery payoff.

With recent stock market volatility and credit tightness, the promise of instant liquidity from one’s home can be tempting. But reverse mortgages are anything but a windfall. In fact, they generate zero income and create new expenses that can ultimately destroy one’s net worth.

Importantly, a reverse mortgage is a mortgage. It is therefore a loan and a lien.

As a lien, the home proudly paid for after decades of hard work is once again subject to the claim of another party. While the lending bank can not gain possession of property through credit related triggers, reverse mortgages present other conditions under which one would be forced to sell the home to repay the loan. Of course, heirs would have to pay off the mortgage if the home is to stay in the family after the owner’s demise.

What separates reverse mortgages from regular mortgages is the flow of funds. A regular mortgage begins with a certain balance. Homeowners make payments to the bank for interest and principal. Over time, the balance drops, as does the interest on that declining balance, and the principal payments eventually eliminate the loan altogether.

A reverse mortgage begins with a balance of zero, spikes up by the amount of the closing costs, and then rises further upon every payment from the bank to the homeowner. The balance also goes up daily by the ever-growing interest charges.

Thus, “reverse” refers to the direction of payments – from bank to homeowner. But don’t be fooled. Just as debt-reducing payments to a bank improve one’s overall finances, new borrowings from it worsen one’s situation.

Bluntly put, reverse mortgages produce huge fees to the lending institution. Because these charges are merely added to the balance owed, obviating the need for a homeowner to write checks, new borrowers are lulled into complacency over the issue of expense.

First, there are closing costs. As with regular mortgages, these include:

In total, typical closing costs fall in the area of 6% of the mortgage. 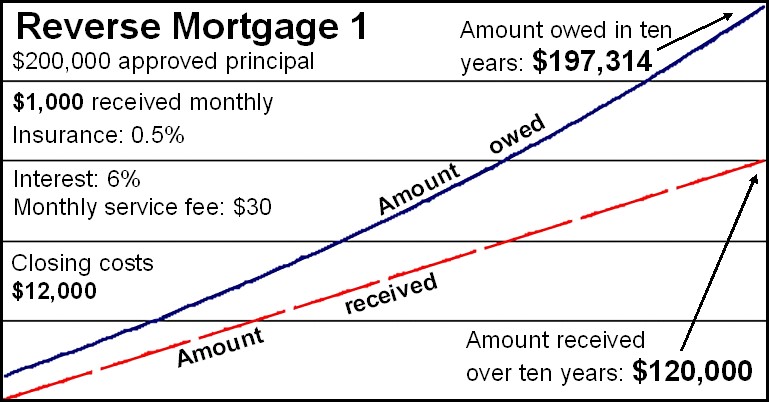 Also to consider are continuing costs. Federal regulations allow banks to charge $30-35 per payment for service. In addition, the bank will pass on annual costs of mortgage insurance, typically 0.5% of the mortgage in the early years. As the mortgage balance rises, possibly to levels beyond the value of the home, these premiums can rise as well.

Lastly, there is the interest on the loan. Reverse mortgages usually have adjustable rates, rendering much uncertainty. Less uncertain is the continual and accelerating growth in balances as interest is charged on ever increasing amounts.  Making matters worse, one can not deduct interest on reverse mortgages as it accrues.  Upon the sale of the home and the payoff of the loan, one can deduct the interest portion of the payment in one shot. This deductibility is worthless if the borrower dies owning the home. It is not worth much more in other scenarios. 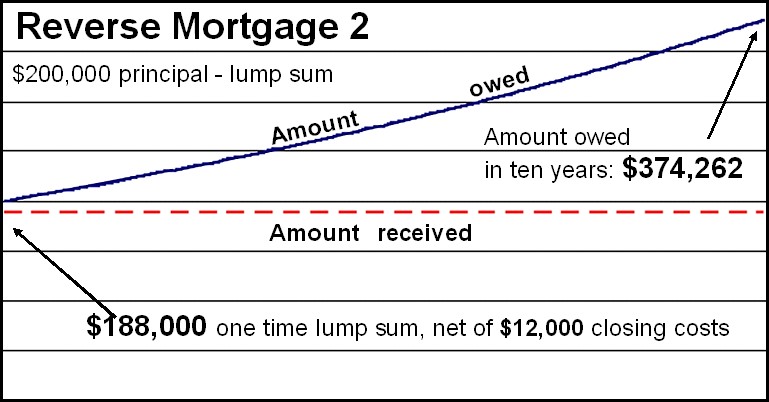 In total, the cost of obtaining money through a reverse mortgage can be over 100% in the first year and still well over the quoted interest rate over time. The after-tax impact is more akin to credit card debt, or loan sharking.

t is quite evident that reverse mortgages are fiscally imprudent. But reasons to avoid them go even deeper. The average family saves very little – next to nothing in recent years. For most, a home serves as the single largest source of wealth. Paying off a mortgage and maintaining a home have over the decades served to allow millions of people accumulate an estate to pass on to their heirs. Reverse mortgages erode and often eliminate this last bastion of a financial legacy.

In sales training courses, reps learn how to qualify prospects for maximum impact of effort. It has long been considered a waste of time to go after the elderly because their spending and investing habits were already well-developed. Further, it was unlikely they had much mobile liquid wealth given their lack of future employment income.

Reverse mortgages serve one purpose – to extract exorbitant fees from a previously written-off sector of the population. If someone needs cash beyond current bank balances, there are a number of more reasonable solutions, including regular home equity lines and arrangements with family members. One can also choose to sell a home on one’s own terms and thereafter live within one’s means.

Reverse mortgages would not be marketed so heavily if they were not so lucrative. Don’t let your elderly clients be snookered.

This article was originally published in NJ Esq August 27, 2008.