As of this writing, the Standard & Poor’s 500 is down over 45% from its peak 15 months ago; bond prices of esteemed corporate issuers indicate distress; and there is fear that the entire financial system is in peril. We have weathered recessions, liquidity crises, and periods of deflation and inflation before, but the economy is clearly in uncharted waters. Extreme uncertainty has led many to extreme fear and a search for safe havens.

Among these places of refuge are some stalwart vehicles that provide safety and earnings. These include treasury bills and bonds, bank CDs below FDIC maximum limits, and well run money market funds. In a hurried flight from stocks and longer term bonds, a number of nervous investors also seek refuge in non-financial alternatives. One of the most sought, and advertised, is gold.

Aside from filling teeth, accessorizing outfits, and certain industrial uses, gold has maintained a special aura in finance. Perhaps due to its central importance during the Mercantile Era or its fixed-peg status until the 1970’s, gold has been treated as if it is better than money. Indeed, cash used to be simply a substitute for gold, theoretically exchangeable at a set rate. In God we trusted, but gold was the real thing. Now it’s just God…and the Fed.

Since gold is now merely another commodity, it is intriguing to see it so eagerly sought in tough times. One can do well if one can predict chaos and buy before impending bad news. Unfortunately, most do not even consider buying gold until after some calamity has already wrought panic.

Recent history is telling. In the late 1970’s, spiraling inflation and its ancillary effects caused gold to soar, peaking in 1980 at about $850 an ounce. It was not until 27 years later in December 2007 that those safety seeking investors finally broke even. Of course, during this same span, the funds spent and merely recovered in gold could have instead more than quadrupled in very safe money markets. Though riskier, those same funds would have gone up 11-fold in bonds and 15-fold in stocks. Longer time spans demonstrate even starker comparative returns. 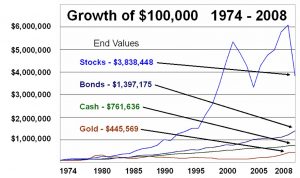 When we think of a safe haven, insurance comes to mind. We obtain life insurance to fulfill the needs of dependents in case of an unexpected death of a provider. We get flood insurance to limit the financial impact of a deluge or broken pipe. Gold is now similarly regarded as a means to weather an economic storm. The question is; when should we pay for this protection?
In the case of a life policy, when is it most advantageous to secure a contract – when we are healthy, or when we have been diagnosed with a life threatening disease? In the case of flood insurance, will we get better prices for coverage after a dry spell or during a hurricane?

Gold is no different. As many purveyors and ‘believers’ attest, gold has at times presented wonderful returns. Specifically, gold did very well from 1977 through 1979, from mid 1985 through 1987, from 1993 into 1994, and for a good part of the current decade. What do the years 1977, 1985, 1993, and 2003 through 2005 have in common? Times were relatively calm, the markets behaved normally, and the economy was growing. In the same way one can get great rates on insurance when one is healthy, one can buy gold cheaply when all is calm.

Rates of Return during Crises

2 Years Going Into / 2 Years Coming Out of each Crisis

Taking this one step further, after bad news was out, how did gold fair as a preserver of wealth? If one bought gold during the turmoil after Nixon’s resignation, or during the inflation spike of the late 1970’s, or amidst the market crash of 1987, substantial sums were lost over the next 2 years. From spells of duress and into the periods that followed, gold performed worse than about any other possible investment.

Critically, gold pays no income, and gold has no employees working to grow anything. Other than its use in specialized industries, it is no different than wheat, oil, or pork bellies in terms of its status as a commodity. When you own it, those committed funds are not invested in something that could be earning income. If you are not buying it for ultimate use, you are speculating. Is speculation something that decreases or increases risk?

Aside from sacrificed income, if stability of value is your desired trait, gold is again anything but safe. It rises rapidly at the onset of a crisis and falls often just as dramatically thereafter. Its average return is less than that of bonds and 5% less than that of stocks. Gold is meanwhile twice as volatile as stocks and eight times more volatile than bonds. Lower returns – thereby lower principal – and greater uncertainty is the opposite of what a safe haven should be.

True safety comes with knowledge; knowledge of the investment properties of “safe havens”; awareness of what drives stock prices; cognizance of the vast number of securities now backed by the government; and awareness of proper portfolio management to limit exposure to calamity and avoid rash decisions.

If safety means absolute avoidance of loss, then federally insured CDs, agencies, and money market funds might make the most sense.  If safety means real, after inflation value in the long term, it may be time to once again look at stocks and bonds. History bears out the fact that functioning companies with motivated people provide better returns and lower volatility than any hunk of metal. Most combinations of stocks and bonds outpace gold, as well as inflation, in the vast majority of time horizons – and especially in times when we go from crisis to calm.

It is often hard to see the light at the end of the tunnel when the news seems so bad. But people will eat, drive, paint, buy shoes, see movies, etc.; and though we know there will be waste and corruption, on the whole our government will put in place mechanisms to help the economy recover. Now is not the time to panic and put funds into non-earning assets.

This is not to say there is never a time for gold. Indeed, when the economy is humming, when inflation is under control, when all seems right with the world – THAT is when a speculator (not an “investor” or a seeker of safety) should consider putting money into gold. Because as good as things can get, you know that somebody is going to muck it up.

This article was originally published in NJ Esq February 16, 2009.

To Top
Skip to toolbar