This was a quarter in which the five year trend of leadership by small and mid cap stocks was reversed, with new dominance coming from mega-cap stocks that have been stuck in neutral for several years.  Since valuation parameters suggest that this could be a major shift in the market, I have begun to shift portfolios to more of a weighting in Dow-type names.  I can’t realistically turn a portfolio over 100% in any given quarter, but I wish I had moved even faster in this direction.

The bottom line is that we made money for the quarter, but not as much as we would have had we been concentrated in mega-cap stocks.  Those stocks drove the S&P to a gain of 5.2%, the Dow Industrials to a gain of 4.7%, and the Nasdaq to a 4% gain thanks to strong gains in Microsoft, Cisco, and some other large cap technology companies.  Gauges of the broader market did less well; the Value Line Index rose by a more modest 0.8% and the Russell 2000 Index rose by only 0.1%.  Your account gained 1.1% for the quarter, more in line with the broader market indices.

This relative performance among the indices is a clear shift from recent years.  As the following graph comparing the S&P 500  and the Russell makes clear, it has been the smaller “growth engine” type of stocks that have led the market higher over the past few years.  That changed abruptly in the last few months.  Many mutual funds that have done well during the decade had negative returns for the quarter; Barrons reports that the average mid-cap and small cap growth mutual funds lost money in this past quarter. 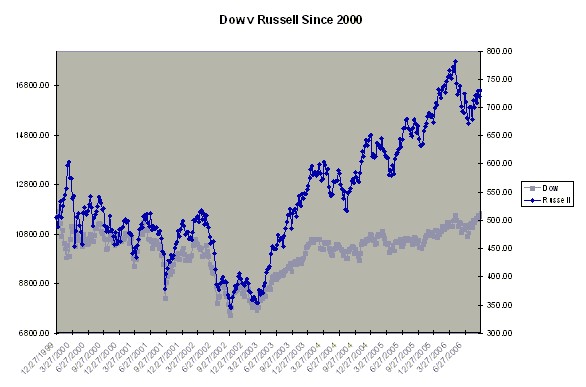 The shift to bigger cap stocks is not the only factor that impacted our relative performance this quarter.  There were two other issues.  First, energy stocks had a weak quarter.  Second, my quantitative filter, while secularly sound with proven long-term added value, experienced unusually poor performance.

With a total of over 13,000 data points going back to 1998, my system’s buys have produced “paper” returns of nearly 18% annualized.  However, in the past quarter, this same quantitative approach picked stocks that produced an annualized return of negative 6% on average.  A probability-based model is going to have deviations in both directions. This quarter’s downward deviation explains the poor results from recent purchases of stocks such as Amkor Technology, Home Depot, Weatherford, and Gardner Denver.

The other major factor that impacted us this quarter was the underperformance of energy stocks.  For example, Conoco Philips is still a large position and it was down 9.2% as oil prices dropped.  It has moved several times between 57 and 72 over the past year, and happened to be at 59 when the quarter ended.  Given expected earnings of $10.28 per share this year, the stock has a PE ratio of 5.8.  Despite my normal focus on cutting losses, it is tough to sell something at that cheap a valuation, especially when certain smaller energy firms trading at similar multiples are being taken over at big premiums.  For instance, Giant Industries was up 22% on a buyout offer this quarter.  Oil dropped more sharply than I expected after the summer driving season.  I have used some protective stop-loss orders, but I am trying to balance that cash management concern with not selling everything into a panic.  Interestingly enough, Exxon Mobil was up last quarter when virtually all other large energy stocks were down; this is another indication of serious money rotating into Dow stocks.

We have benefited by holding onto some other good stocks during bad down cycles.    Mobile Telesystems (MBT) was up 28.3% after having fallen 11.1% the previous quarter.  Just as (I hope) we are doing in Conoco now, we rode out a seemingly irrational down move in MBT and were rewarded.  Lehman Brothers rose 13.4% after dropping 9.8% in the previous quarter.  This is another quality firm with a sometimes volatile stock price, but as I said in my last letter, a lot of people have done very well by ignoring the short term fluctuations in Lehman and Goldman Sachs, and just holding on tight.

We had a mixed bag in some other good names.  Microsoft gained 17.4%, and we bought it near its lows for the year.  But Genentech did very little for us this quarter (+1.1%).  It is another excellent company that I want to continue to own; it has grown earnings at over 50% compounded over the past 3-4 years and has a PE ratio that is lower than its earnings growth.

Here is a look at the 15 largest holdings in your account as of last June, with quarterly performance and brief commentary:

Johnson & Johnson is a great company and has been quite stable during market declines.  Tata has been discussed at length in previous correspondence; an Indian auto maker whose prospects are akin to those of GM in the 1950s.  Conoco is discussed above, as are Goldman and Lehman.  Posco, the Korean steelmaker, fell in late summer and rebounded in September; steel stocks in general may be helped by a recent announcement from the Indian government about doubling its investment in infrastructure.  Arc Energy Trust is in Canadian tar sands, and has a yield of about 7.5%, which helps to stabilize the stock even when the energy sector as a whole is weak.  ChipMos, though flat this quarter, has been a disappointment and is under review.  Belden manufactures and markets high speed electronic cables, and my system still projects a double digit compound annual return on it.  Stealthgas (GASS)  is a little frustrating, because we just missed selling some at the top end of its $12 – 14 trading range, but this is a promising shipping enterprise with young, aggressive management and a strong board.  GE participated in the renewed interest in mega-cap stocks; its earnings are double what they were in 1998 but the stock price is the same.  ADRE is an exchange-traded fund that is indexed to stocks in emerging markets, and offers a healthy diversification.  Everest Re is one of many re-insurers who climbed as casualty losses were lower than the market had “discounted” for this hurricane season.  Amgen is a major presence in cancer care, and moved gradually higher for most of the quarter.

Some aspects of the quarter were counterintuitive.  Proctor & Gamble is a good example of the return to mega-caps.  It is certainly a fine company.  But at the end of June its stock had a PE ratio of 21 after growing its earnings at a compound annual rate of 12% over the last three years.  My system projected a “payback period” of 10.5 years on the stock and a compound annual return that was slightly negative.  Even though it was not a cheap stock, it gained 11.5% for the quarter – mostly because it is a stable, defensive name.  A similar analysis applies to Merck, and to some other large companies.

If I had put you into Dow stocks in January 2000, you’d just be breaking even now.  The S&P 500 is about 12% below its peak.  The Nasdaq is a full 60% below its peak.  Over the long term, our universe of stock has done much better than the S&P and these other indices, but a significant rotation back into Dow and Dow-type names seems to have begun in May.

I’ve said in several letters that the market is likely to grind out returns in the high single digits annually in this decade.  Warren Buffet has said pretty much the same thing.  I have no reason to alter that view at this stage.  Stocks are neither cheap nor particularly rich relative to today’s interest rates.  Earnings momentum remains reasonably strong, with anticipated growth of 12% in the fourth quarter.  The market is back above its 200 day moving average, indicating that bullish momentum remains.  The fourth quarter is generally a period that is seasonally strong.  Our portfolio is positioned to do well in the fourth quarter, and I hope I can report accordingly at year end.

* Past performance is not necessarily indicative of future performance. Results for individual clients may vary. Results are not audited. Byrne Asset numbers reflect the addition of certain dividends and deduction of all fees. S&P numbers are based on the total return of Vanguard’s S&P 500 Index Fund.