The mini-panic of the last quarter of 2018 seems like a distant memory as 2019 witnessed the best start for the S&P 500 in over 20 years.  The bad things that were supposed to happen early this year, notably Fed rate hikes and Brexit, have not happened. Though GDP growth slowed to a 2.2% rate, largely due to the government shutdown and trade fears, most economic indicators remain fairly solid and stocks are again near all-time highs.  This is true even though year-over-year corporate earnings are expected to be slightly lower this year than last.

Occasionally, there are bouts of fear when people look at certain charts and perceive that the market rally has accelerated – perhaps too much.  Here is a basic long term chart of stock prices some use to support current apprehension. 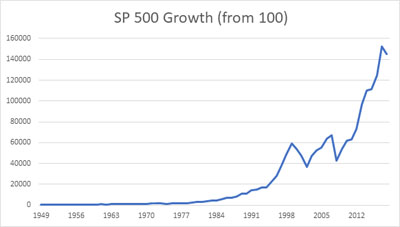 Notably, that chart creates a misleading sensation because it shows only price changes – and does so on a scale which magnifies absolute price gains versus percentage gains.  The fact of the matter is that a higher proportion of overall returns on stocks used to come from dividends rather than price appreciation.  The shift is rational because tax law treats capital gains much more favorably than dividend income.  When you produce the same chart to show total return on a lognormal scale, you get a completely different picture from the very same facts and circumstances: 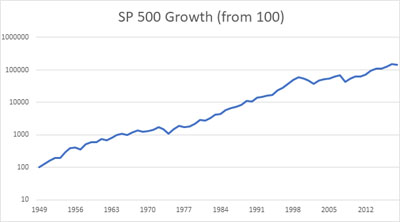 Such cogent analysis reveals that there has been no more speculative frenzy in recent years than at most other times in modern history. Thus fear of heights based on the first chart is unwarranted.  There may be fundamental reasons for stocks to fall at some point, but total return is currently not one of them as recent history is not a departure from the norm.

We can conjure other reasons for fear. For instance, perhaps the market has already rallied enough for the year.  Goldman Sachs addressed that concern in a recent comment:

The S&P 500 has risen nearly 12% in 2019, prompting questions about potential returns for the rest of the year and the prudence of de-risking. We would highlight that historically, such strong gains in the beginning of a year have usually presaged further strength. In fact, following months with returns as strong as this past January’s, the average 12-month return was over 21% and the market turned negative just 5% of the time.

There are some signs that the economy is a little bit softer but there is no clear sign of the recession that has been just around the corner for a long time.  GDP growth has slowed a bit from more recent quarters, but there were temporary factors such as the federal shutdown. The final number for 2018 was 2.9%, up from 2017’s 2.2% and the prior decade’s sub-2% pace.  Job growth has slowed as well, but we are at full employment – and we are there with inflation running at only 1.5% annually.  Durable goods orders are near peak levels.  The Index of Leading Economic Indicators, while slowing a bit, still indicates continuing growth. It is noteworthy that there is a wider dispersion of predictions for GDP growth than we’ve seen in many years, and some analysts believe that more disagreement is in itself a bad sign.  [www.thinkadvisor.com/2019/03/25].

We are reasonably constructive at the micro level as well.  Market information vendor YCharts publishes data based on historical price-to-earnings and price-to-sales ratios for individual stocks to come up with projected current values. Aside, we go deeper and also look at price to free cash flow and price to operating earnings among other things.  But continuing, YCharts also compiles a consensus price target (with a somewhat unclear time horizon) for each stock. Here are the quarterly closing prices together with projected values and price targets of your five largest positions:

These measures certainly have their limitations, but they provide at least some useful perspective.

It is also worth talking about the role of stock buybacks by major companies.  Buybacks are still setting records and substantially outpacing dividend payments.  This is pretty rational.  Buybacks exert an upward influence on stock prices, and any resulting capital gains are taxed at a favorable rate. In contrast, dividend payments are taxed at the same rate as earned income.  Tax policy and low interest rates have combined to make stock buybacks an attractive strategic move for many companies.  Low interest rates are relevant because some companies borrow in the fixed income market to buy back stock.  This juices earnings per share, and many companies maintain that a return of capital is an appropriate strategy.

We have talked before about how very concentrated large cap portfolios have done well in recent years.  Goldman Sachs points out that a mere ten stocks have accounted for nearly 25% of the S&P 500’s rise in the past decade.  That has made it hard for active managers – who believe in a prudent degree of diversification – to match the return of the S&P.  But when you get a major hit as in the case of Boeing or the 39% peak-to-trough drop in Apple in the past nine months, it is clear why diversification is critical to wealth preservation. Yes – most of these stocks come back – but that is not always the case.  Think Sun Microsystems which went from over $100 to under $3.  Or think Xerox or Eastman Kodak.  That’s why we have risk controls.  While we may be overly cautious at times, combining a loss limitation regimen while identifying excellent growth opportunities is a smart long-term strategy.

The market has been spooked by the inversion of the yield curve – supposedly a harbinger of recession. We discussed this topic at length in our last letter; it is online at byrneasset.com if you don’t have it and wish to re-read that analysis.  In short, the lack of a spread between long- and short-term rates reduces bank profits, harms financial stocks, and constricts bank lending.  But the current situation is distinguishable from inversions caused by the Fed pushing short-term rates too high – which is indeed an impediment to growth. The present inversion may have more to do with US rates not getting too far out of line with European rates, which are low and even negative in some places.  Of course, European economies are slowing and that may ultimately have some impact on domestic activity.  But the bottom line is that borrowing costs are cheap and not impeding growth – flat, inverted, whatever. Low is low.

We have not made any major investment shifts recently. We have shifted portfolios slightly in the direction of value stocks with mixed results.  We bought Mohawk Industries (MHK), a leading maker of flooring and carpets, after observing that it had gotten particularly cheap relative to housing stocks.  In essence, the stock seemed like both an excellent value and a good bet on a reversion to the mean with respect to homebuilders.  So far, the stock has had a brief pop on encouraging earnings news but has retreated back to our buy zone.  Tiffany seemed to be punished a little too much last year, so we bought some.  It was trading at over $135 last summer, and we see no reason why it can’t get back there.

We are also beginning to nibble at General Motors, largely because they are seen within the auto industry as the leader in autonomous vehicles.

We’ve had some mediocre results with currently held value stocks.  AT&T can be regarded as a value stock given its  6.5% dividend yield.  But the overhang on the stock is a concern that utility managers cannot effectively compete with the likes of Netflix, Amazon and others in the race for superior entertainment content.  If it is stable and provides a 6.5% return for the year, that would be fine.  CVS continues to enjoy solid revenue growth but the stock has been pressured due to the debt needed for the acquisition of Aetna and the overall recent weakness in health care stocks.  The company does have a promising long-term, full service health care model.  You never know when a particular stock might turn; General Mills has been frustrating for months but then returned 34.1%x this quarter.

We are keeping a watchful eye on Boeing.  The stock has traditionally rebounded from other scares, including the one in 2013 over lithium batteries.  Boeing still has a backlog of seven years, totaling over 5,900 aircraft worth $412B.  We will be mindful of any order cancellations that might materially reduce that backlog and change the fundamental outlook for Boeing.  It appears that a software fix will resolve the problems with the 737 MAX 8 plane.  Despite that issue, Boeing returned 18.9% in the first quarter.

In sum, the year is off to a very good start.  There is a much lower risk of panic associated with concerns about higher interest rates.  Ironically, the market now seems more concerned with lower interest rates.  But lower rates make stocks all the more attractive – both in terms of relative value to bonds as well as higher valuations from discounted cash flow models and the like.  At some point, we expect so-called “value” stocks to do better.  But many value stocks are in the energy and financial sectors – which have simply been less attractive than technology and consumer stocks.  Your portfolio is doing quite well so far this year and we’ve seen no reason to make major changes this quarter.  As always, we will continue to monitor economic and corporate events and to look for any opportunities to optimize investment returns.  As always, feel free to contact us with any questions or concerns – and thank you for your continued confidence and business.