Stocks rallied back sharply during the second quarter, exceeding most expectations and mystifying some of the world’s most successful investors (including Stan Druckenmiller) who admit being left in the dust.  But the market remains slightly lower for the year.  We have navigated this pretty well.  Going forward, it is fair to say that there is a much wider range of potential outcomes than one would usually posit.

Our letter in early April sounded an optimistic note as we rightly thought that markets would start to price in substantial progress on defeating the virus and re-opening the economy.  Moreover, the federal government and its agencies have provided stimulus unprecedented in both magnitude and speed. Spending and tax relief approved so far amount to over $3 trillion – about 15% of our $20 trillion gross domestic product.

Monetary policy has complemented fiscal stimulus.  The Federal Reserve brought back  quantitative easing (QE) through which it has already bought over $3 trillion in government securities. The Fed also dropped the target Federal Funds rate from 1.5% to 0%, increased lending facilities to the 24 large primary dealers, relaunched the money market mutual fund liquidity and commercial paper funding facilities, began lending directly to corporations, and expanded its repo operations from about $100 billion into the trillions.

The benefits of these programs are not equally shared, and there are aspects of the current slowdown that are immune to fiscal and monetary policy. Still, the amounts are massive and the impact on markets has been significant.  Some economists question whether the government has unlimited capacity to print money, and whether all this might hurt the value of the dollar at some point.

Generally speaking, volatility does a good job of scaring people out of the market – often at just the wrong time.  Here is an instructive chart from Mercer Consulting showing annual returns for the S&P, along with the lowest point in each of those years: 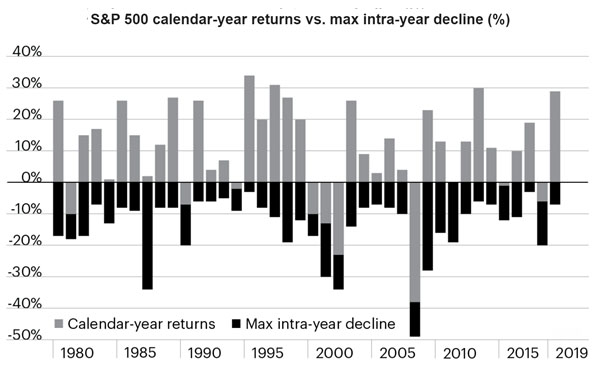 So what about now?  It is a particularly difficult time to predict.  The market is not cheap, yet investment grade corporate bonds offer very minimal yield.  Earnings estimates are less reliable than ever, which makes valuation that much more difficult to assess.  As of now, the consensus earnings estimate for the S&P in 2021 is $164, which compares to $162.97 in 2019 and $161.93 in 2018.  With the S&P 500 at 3100, that indicates a forward PE ratio of 18.9, and thus an earnings yield of 5.29% — still a wide spread to investment grade fixed income securities.

The bullish case stems from encouraging progress on a vaccine and the resumption of much economic activity – whether people working from home or younger people in particular returning to pre-virus routines.  A vaccine may be ready by year-end, which would obviously trigger a quick return to economic normalization.   Yet for now, the virus is accelerating in much of the country.  Despite the unemployment and related financial stress, it is unclear how much more stimulus will come from Washington.

Adding to uncertainty is the upcoming election.  Markets do not like uncertainty – either before or after an election.  The market sold off 11% between Election Day of 2000 and December 21 of that year.  There is the risk of another post-election mess this time – particularly given the budding controversies around mail-in ballots.  Markets also tend to dislike higher taxes, and if the Biden campaign tilts too far to the left, that may also unnerve markets.  The other comparison that has surfaced lately is to 1968.  Despite the social troubles that year, the market had a pretty steady rally in the second half of the year.

Our stock selection has tilted toward companies that are well positioned in the current virus environment.  Amazon is our largest holding.  It has gained retail share, and benefits from increased use of its cloud service.  The stock is up 49% for the year.  We are carefully watching the threats to Amazon, whether from European anti-trust regulators or stemming from Jeff Bezos’ ownership of The Washington Post and Trump associating it with Amazon.  Microsoft has been the other huge beneficiary of cloud services, and it is up 29.7% for the year.  And many websites are dependent upon Adobe, which has partnered with Microsoft on cloud services.  Adobe is up 32%.  People are staying in touch on Facebook, which is up 10.6%, but it is mired in political controversy that is affecting its ad revenue.  None of these stocks are cheap.

What about comparisons to 1999-2000?  There have been many such comparisons, going all the way back to 2014.  Woops.  The Nasdaq-100 at its peak in 2000 traded at about 40x earnings versus 28x now.  Microsoft’s PE back then was 60x forward earnings – almost twice today’s level.[2]    Of course, nothing says that a market has to be at peak valuation before it goes down.

Since a picture is sometimes worth 1000 words, here you can see how key holdings mentioned above have done relative to the S&P 500 Index this year:

Elsewhere in technology, we’ve made a bet that with a real technologist finally at the helm, the lumbering giant IBM might actually turn around.  Their artificial intelligence and quantum computing capabilities, and a cheap valuation, make this a reasonable if uncertain wager.

Most of the health care sector lagged the market this quarter.  We have tried to maintain a balance between therapeutics, services, and medical equipment and supplies, while avoiding areas that are most at risk from policies that a Democratic Administration might impose.  Our largest healthcare position is CVS.  It is trading at <9x forward P/E and pays a >3% dividend yield.  Most people associate CVS with its retail pharmacy, but that is a smaller portion of their overall business.  CVS is morphing into a broad-based healthcare services company in close touch with the customer, including being the leading pharmacy benefits manager and managed care company.  CVS Minute Clinics are becoming an integral part of primary care, serving basic healthcare needs without the need for more expensive hospital-based emergency room services, and they are rapidly rolling out telemedicine services for virtual visits.

So-called value stocks tend to have higher dividends, and in theory should act to keep portfolios more stable.  But many value stocks, notably energy shares, have been terrible this year.  Who knew that oil could trade at a negative price, even briefly?   Oil futures went negative because we are running out of storage space for oil.  Utility stocks have been disappointing as well – despite low interest rates and cheap fuel costs.  We thought they would lend stability to portfolios.  Even though Dominion has been best of breed, it still lagged the S&P by 6.7% in the past quarter – after having been a helpful holding during the panic selloff.

Banks are considered value stocks too, but it is hard for them to make money with interest rates this low.  Moreover, there are fears of defaults on bank loans if the recession lasts too long.  We have minimized holdings in these categories, while being mindful of the need to maintain reasonable portfolio diversification.  So we own JP Morgan, which is as close as we come to a financial fortress.  And we own KKR, which benefits from the trend toward alternative investments.  It is up 5.8% for the year but it can move several percent on a given day.

Particularly at a time of such volatility, asset allocation is a more important consideration than stock selection.  We are happy to discuss any changes you want to your asset allocation at any time.  We try to establish allocations at a strategic level, which translates generally as developing and adhering to a long-term plan.  Adjustments are driven as much by advancing age as anything.  We maintain the long view but make some adjustments as unforeseen fundamental forces (such as Covid) influence the market.   Most notably, we sold travel & leisure stocks and some other stocks before the worst of the decline in March.  That helped the cause.

Not much more to report at this stage.  We sent two interim letters in the first quarter, when we thought rapidly changing circumstances warranted an update.  We will do so again if deemed helpful.  Meanwhile, please do not hesitate to reach out to any of us with any questions or concerns.  We are still working remotely.  The office phone forwards to Art.  My cell is 609 462 0078.  We are emailing letters because many clients are not at their permanent addresses, and many people don’t want a lot of envelopes these days.  If you prefer a mailed letter, just let us know.

Our best wishes for good health and a return to normalcy sooner than later.